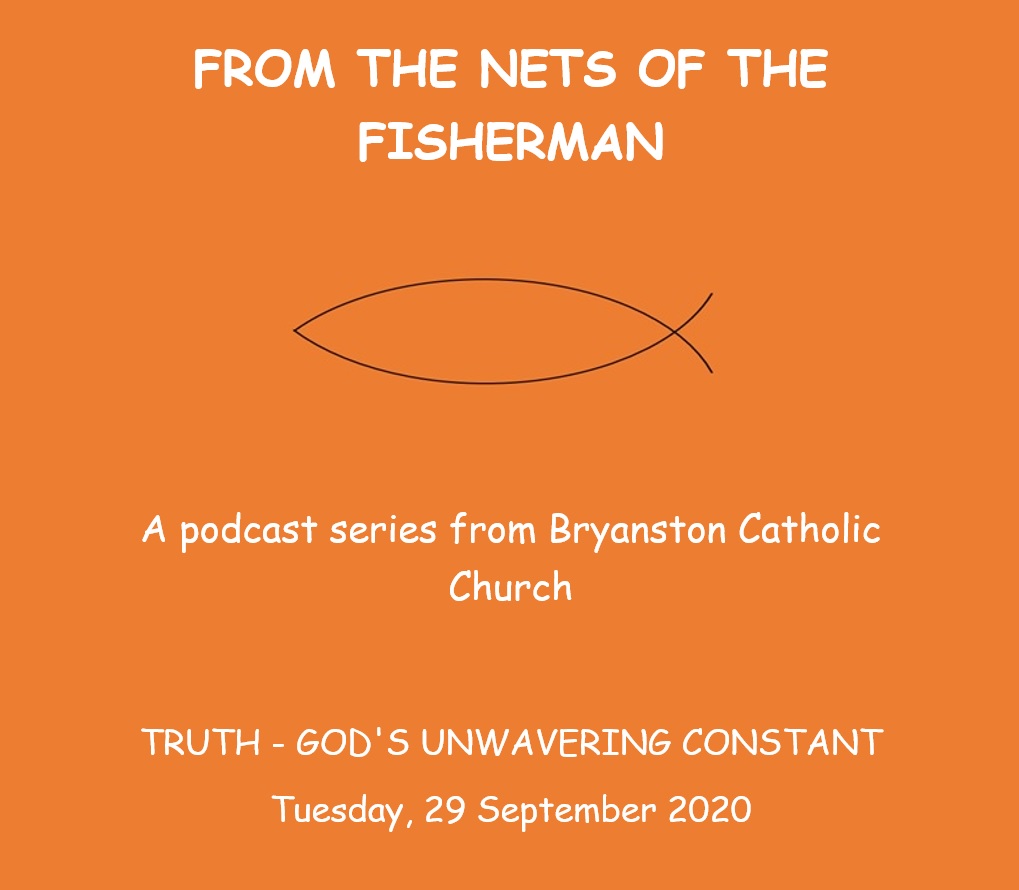 From the Nets of the Fisherman – Part 3

Welcome to another instalment of the podcast series, The Nets of the Fisherman. Today I would like to talk about truth and Christian leadership.

Truth, it seems, has now become just another commodity – to be bent and moulded to suit a particular person’s narrative or agenda. As a Christian, that is not the type leader I want to be, it is not the type of character I would like to project – ever – and especially as it relates to my work for the church.

The relativism of today’s moral compass is a problem founded in sand and the results thereof are easy to see – just turn on your television and listen to anyone of several news channels.

We live in a time of uncertainty, worry and anxiety, anger and above all, in a time where truth seems to be becoming more and more of a flexible commodity … to be used and manipulated as the user deems fit.

This has been exacerbated by the occurrence of the Coronavirus pandemic, a pernicious and non-discriminatory disease that has spread alarmingly and killed hundreds of thousands of people in its wake. However, it is at times like these when we see the true colours of leadership coming to the fore and it has, in many instances, been found wanting and is not the kind of leadership that we need.

In my opinion, bad leadership more often than not manifests itself in an inward-looking psychosis – one that is characterised by self-centeredness and concern for yourself and not for those around you. In these pandemic affected times, many examples of this type of behaviour have been exposed, right from the top down through the rank and file.

Although issues of leadership have been around since the dawn of time and the fact that the influence of a secular world has made an increasingly negative impact on the truth since the eighteenth-century age of enlightenment, world crisis’ always bring out either the lack of leadership or the absolute converse. This pandemic, more than any other world crisis has showcased the lack of leadership within the global governance environment. This phenomenon, of course, is helped by the age of instant communication and the proliferation of social communication platforms like Twitter, Facebook and the like.

The global audience has been bombarded with an overload of ‘fake news!’, bias loaded opinion, misinformation and on many occasions, downright lies! Now while it is not my intention to point out specific incidences of these egregious debasements of the truth, for they are plain for all to see for those who would look with an eye of truth. However, the truth, it would seem, has in many instances, been relegated to an unwanted inconvenience!

In September of 2019, William Davies of the Guardian stated in his opening paragraph:

“We live in a time of political fury and hardening cultural divides. But if there is one thing on which virtually everyone is agreed, it is that the news and information we receive is biased.” i

Davies was talking of the perceived bias in news coverage but I would like to suggest that we could replace or add to the word ‘biased’ by using the word ‘suspect’ because we have to ask ourselves, in this modern time, how far from the centreline of factual truth has news reporting and commentary strayed?

I think that the reaction of some newscasters is telling – In an age of intense reporting, we are being hit by a barrage of ‘anti’ reporting titled ‘fact-checking …!’ – reports about other reports. Whether it is the fact-checking of an individual’s public comment or specific news outlets news coverage, the rather sinister perception is that a lot of the information we receive is at best suspect.

– What has happened to the truth?

What mechanisms carry the most data, enabling us to formulate a determination of truth in today’s society? There are many sources of information (and by implication, sources of truth) available to the individual, from personal interaction, through personal correspondence and out into the world at large – the internet, news agencies, libraries and so on. Data input to our cognitive functioning has been around since our creation – it is how we advanced, how we survived, but informative data input, that which informs our sense of reason and logical determination, is rather more recent.

We need to separate the data gathered for cognizance or natural awareness from that, gathered to inform our view of life or worldview.

For example, data related to my surrounding informs me about where I should place my feet when I’m walking or what I should and should not touch, smell etc. However, the information I receive which informs me about the actions of others, specifically about what they’re saying or doing, about current affairs, conflicts, national or world events etcetera, convey more than just information about base level awareness but convey a more abstract class of information, a class of information which is determinate of what is or isn’t the ‘truth’.

But … as Pilate famously said to Jesus – ‘quid est veritas?’ – What is truth?

From a literary perspective, truth is defined as “that which is true or in accordance with fact or reality”; “the quality or state of being true”; “a fact or belief that is accepted as true”.

But, is what is true for me, also true for you?

Relativism is the doctrine that knowledge, truth, and morality exist in relation to culture, society, or historical context, and are not absolute. This would be true of truths which were grounded in man’s rather morally deficient view of life. That, however, does not make it right. It seems that in the modern age, the sources of ‘truth’ have become more flexible with their interpretation, to the point, perhaps, where they only take the version which suits the object of their current missive.

– Leadership not founded in God’s truth is fragile at best

One of the sad traits in modern secular leadership is the exclusion of God, for that means that that style of leadership is founded on the vagaries of human moral judgement and we thus get back to the relativism of human nature!

So, what is Christian leadership?

Although there are a number of characteristics which might define a good Christian leader, a foundation in God is essential. This seems logical for how is there any better leader of men than He that created them?

Let us perhaps look at a few of the more mundane leadership qualities of contemporary secular society and compare them with the character traits of Jesus of Nazareth:

In a Christian context, integrity must include: LOVE

Self-Control Delegation Is the assignment of any authority to another person (normally from a manager to a subordinate) to carry out specific activities.

In a Christian contexst, delegation is not ‘fire and forget’ but a contined loving involvement. LOVE

Wisdom Gratitude The quality of being thankful; readiness to show appreciation for and to return kindness.

In a Christian context, gratitude is founded in love and kindness – it has a deep and meaningful connotation. LOVE

As can be seen, the Christian Leaders principles go far beyond the singular platitude of everyday leadership and it is always founded in love, honesty and the truth.

Within the ambit of contemporary norms, the truth appears to have become a difficult thorn to bear! It would seem that the general outlook in society has lost its moral compass, making false narrative seem more normative by comparison. One only has to look at political leadership in a time of social upheaval to see abundant examples of this pernicious trend. Truth to contemporary society … it would seem, is both a scarce commodity and an inconvenient component of moral suasion!

So perhaps a few well-framed quotes might help to counter or clarify today’s frightening social decline:

As leaders within the church, let us not forget the principles of Christian leadership founded in love. Let us be the shining light, showing the way of Christ like leadership.