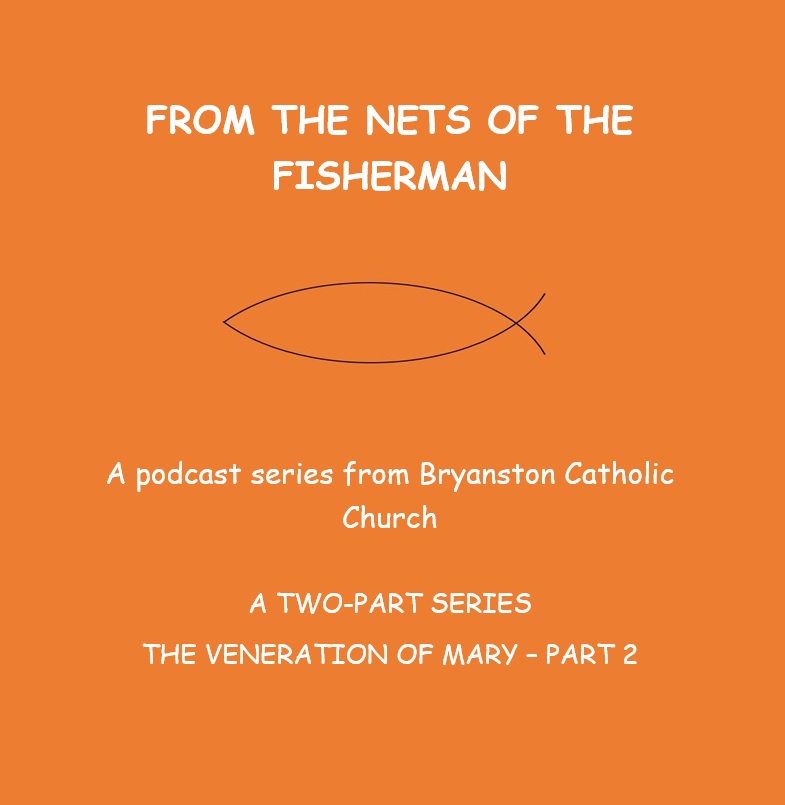 From the Nets of the Fisherman – Part 2

Today we begin the second and last part of the series entitled, ‘The Veneration of Mary the Mother of God’. In last week’s podcast, we introduced that rather contentious question asking whether our love, our _veneration_ of Mary could be construed as idolatry? Certainly, it is viewed this way in some parts of the Protestant and Evangelical worlds.

In the first of these talks, we talked more about what it means to worship and the different aspects of adoration. This week we get closer to the actual controversy and develop an apologetic for our point of view.

*The Veneration of Mary the Mother of God (Part 2)*

*Is veneration a cause for concern?*

In part one we talked about worship and in particular, latria, what it means and to whom it is applied. In part two, we are going to concentrate on ‘veneration’, in particular as it relates to Mary, the Mother of God.

First off, let’s establish a line in the sand – Mary is *NOT* divine, she is a creature just like you and me and, in so saying, Mary _cannot_ be afforded latria, the reverence and adoration _exclusively reserved for God_.

*dulia*
Veneration and invocation which is given to saints as the servants of God, distinguished from latria, the worship of God.

*hyperdulia*
A level of veneration higher than dulia but less than latria, properly given to the Virgin Mary only.

Although we are all special in the sight of God (remember, we are made in His image), Mary was chosen from all eternity to be the bearer of the Father’s only begotten Son and which meant that Mary was, above all others, _reserved for a special honour_. The Catechism of the Catholic Church says:

“_God sent forth his Son,” but to prepare a body for him, he wanted the free cooperation of a creature. For this, from all eternity God chose for the mother of his Son a daughter of Israel, a young Jewish woman of Nazareth in Galilee, “a virgin betrothed to a man whose name was Joseph, of the house of David; and the virgin’s name was Mary_”

The angel Gabriel affirmed this when he greeted Mary at the annunciation:

He said that as if addressing her with a given ‘title’ – “_Hail, Full of Grace_” which could be interpreted as elevating or re-affirming her importance!

Mary’s unequivocal acceptance of God’s command – the free cooperation described in the Catechism of the Catholic Church, is what sets her apart in this salvific action, “_Mary is the creature who opened the door to her Creator in a special way, placing herself in His hands without reserve._” Said His Holiness Pope Benedict XVI.

_By aligning Mary’s story to that of the history of the Patriarch Abraham, Luke conjoins salvation history. Just as Abraham, the father of believers, responded to God in faith assured only in the divine promise, so Mary trusts implicitly in the word that the messenger of God has announced to her, and becomes the model and Mother of all believers._

Mary leads us in our faith journey, teaching us as the one who has travelled the way first:

“_It is the profound humility of the obedient faith of Mary, who welcomes within her even what she does not understand in God’s action, leaving it to God to open her mind and heart. “_Blessed is she who believed that there would be a fulfilment of what was spoken to her from the Lord_” her kinswoman Elizabeth exclaims. It is exactly because of this faith that all generations will call her blessed._” said Benedict.

It is thus that we venerate Mary, not only as of the Mother of God but also as a teacher, example of faith and first among women. We venerate (dulia) all saints, who rest eternally in beatific communion with God and whose lives are an example to all Christians however, Mary occupies a special place in our hearts. The Church “_holds Mary up for us as the perfect example of one who heard God’s word, believed it, kept it, and in whom that obedience bore perfect fruit… she (the church) also holds Mary up for our esteem and respect since she was the first disciple and since we, too, are called to be disciples of Jesus. In a sense, the Church would invite us all to become like Mary._” said Matthew Hill in his book What About Mary?

So Mary, as the queen of the saints, attracts special veneration. The term hyperdulia is used to indicate the special veneration due to Mary; it is greater than the ordinary dulia for other saints, but _utterly_ unlike the latria due only to God.

And this is where Catholics and our Protestant cousins so often diverge.

Many fundamentalist Protestants complain that addressing Mary as the Mother of God, for instance, is wrong and it is idolatrous for that very statement. They claim it would mean Mary was older than God, in effect the origin of God and a deity herself! This is a mistake of over-literalism! Martin Luther himself said: “We too know very well that God did not derive his divinity from Mary…”

*Catholic Answers* puts it well when they say:

Syllogistically, since Mary is the mother of Jesus and Jesus is God, then Mary must be _the Mother of God_. To posit that Jesus’ divine and human nature were separate and that Mary only carried Christ’s human nature would be a reinvention of the fifth-century heresy of _Nestorianism._

Therefore, Mary *IS* the Mother of God, though yet a creature chosen by God.

There are many such objections, all of which have been refuted by apologists and theologians.

It is thus that we venerate her in so special a way, hyperdulia _but as a creature of God_, this veneration is limited to honouring her as a saint and to following her example of an exemplary life in Christ.

Taking this veneration to extremes though would border on idolatrous worship, (or as it is sometimes referred to – Mariolatry) and that, is _wrong._

Fundamentalists, though, tend to think of any veneration of Mary or the saints as idolatrous! This is again based on a narrow and literalist view of history and the written word. Think of the fourth commandment – “Honour your father and your mother…”. If honouring Mary and the Saints is idolatrous, then the Fourth Commandment itself is promoting idolatry – which it most certainly isn’t!

“_The fourth commandment … shows us the order of charity. God has willed that, after him, we should honour our parents to whom we owe life and who have handed on to us the knowledge of God. We are obliged to honour and respect all those whom God, for our good, has vested with his authority._”

Tim Staple puts the importance of Mary this way when discussing Mary:

“_When the president comes to a town on an official visit, we expect to see a big to-do. Why? Because of the dignity of his office._

So it is with Mary. Her vocation is immeasurably greater than that of any king, president, or prime minister. She is the Mother of God.”

In a thought-provoking article entitled, _*Mary – The Symbol of the Power of God’s Grace and Love*_, the late Professor Brian Gaybba describes Mary as:

“_…being singled out by both Catholics and the churches of the East as being unique amongst human beings because she and she alone had a role to play in the actual unification of the community of the Trinity with the community of humanity._”

She did this he said,

“_…by giving her body to God as the womb in which the second person of the Trinity would take on human flesh while remaining fully divine as well._”

It is for this reason, he said, that she is seen as the second Eve, a new beginning where God demonstrates His Grace to forgive and to heal this world, so full of goodness, yet filled with sin! Prof. Gaybba goes on to say:

As you travel through the shrines devoted to our Blessed Mother on the pilgrimage, give some thought to the role that Mary played in our salvation. And while that veneration may happen in front of a statue, a shrine or just a landscape remember, it is not what you are looking at that is being venerated but that which, in your mind, is behind the object of your thought – _Mary the holy Mother of God._

_Hail Mary, full of grace._
_The Lord is with thee._
_Blessed art thou amongst women_
_and blessed is the fruit of thy womb, Jesus._