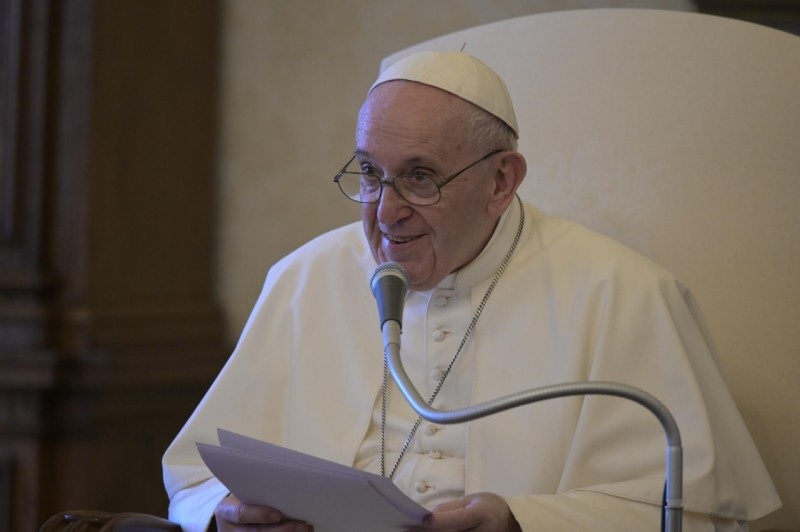 Catechesis “To Heal the World”  02 by Pope Francis

Catechesis “To Heal the World”  02

Summary of the Holy Father’s words:

Dear Brothers and Sisters, in our continuing catechesis on the effects of the current pandemic in the light of the Church’s social doctrine, we now consider the theme of human dignity. The pandemic has made us more aware of the spread within our societies of a false, individualistic way of thinking, one that rejects human dignity and relationships, views persons as consumer goods and creates a “throw away” culture (cf. Evangelii Gaudium, 53). In contrast, faith teaches that we have been created in God’s image and likeness, made for love and for communion of life with him, with one another and with the whole of creation. Jesus tells us that true discipleship consists in following his example by spending ourselves in service of others. Our God-given dignity and the rights that arise from it are the ultimate foundation of all social life, and have serious social, economic and political implications. In responding to the pandemic we Christians are called to combat all violations of human dignity as contrary to the Gospel, and to work for the wellbeing of our whole human family and our common home.

The pandemic has highlighted how vulnerable and interconnected everyone is. If we do not take care of one another, starting with the least, with those who are most impacted, including creation, we cannot heal the world.

Commendable is the effort of so many people who have been offering evidence of human and Christian love for neighbour, dedicating themselves to the sick even at the risk of their own health. They are heroes! However, the coronavirus is not the only disease to be fought, but rather, the pandemic has shed light on broader social ills. One of these is a distorted view of the person, a perspective that ignores the dignity and relational nature of the person. At times we look at others as objects, to be used and discarded. In reality this type of perspective blinds and fosters an individualistic and aggressive throw-away culture, which transforms the human being into a consumer good (cf. Apostolic Exhortation Evangelii Gaudium, 53; Encyclical Laudato Si’, [LS], 22).

In the light of faith we know, instead, that God looks at a man and a woman in another manner. He created us not as objects but as people loved and capable of loving; He has created us in His image and likeness (see Gen 1:27). In this way He has given us a unique dignity, calling us to live in communion with Him, in communion with our sisters and our brothers, with respect for all creation. In communion, in harmony, we might say. Creation is the harmony in which we are called to live. And in this communion, in this harmony that is communion, God gives us the ability to procreate and safeguard life (see Gen 1:28-29), to till and keep the land (see Gen 2:15; LS, 67). It is clear that one cannot procreate and safeguard life without harmony; it will be destroyed.

We have an example of that individualistic perspective, that which is not harmony, in the Gospels, in the request made to Jesus by the mother of the disciples James and John (cf. Mt 20:20-38). She wanted her sons to sit at the right and the left of the new king. But Jesus proposes another type of vision: that of service and of giving one’s life for others, and He confirms it by immediately restoring sight to two blind men and making them His disciples (see Mt 20:29-34). Seeking to climb in life, to be superior to others, destroys harmony. It is the logic of dominion, of dominating others. Harmony is something else: it is service.

Therefore, let us ask the Lord to give us eyes attentive to our brothers and sisters, especially those who are suffering. As Jesus’s disciples we do not want to be indifferent or individualistic. These are the two unpleasant attitudes that run counter to harmony. Indifferent: I look the other way. Individualist: looking out only for one’s own interest. The harmony created by God asks that we look at others, the needs of others, the problems of others, in communion. We want to recognise the human dignity in every person, whatever his or her race, language or condition might be. Harmony leads you to recognise human dignity, that harmony created by God, with humanity at the centre.

The Second Vatican Council emphasises that this dignity is inalienable, because it “was created ‘to the image of God’” (Pastoral Constitution Gaudium et Spes, 12). It lies at the foundation of all social life and determines its operative principles. In modern culture, the closest reference to the principle of the inalienable dignity of the person is the Universal Declaration of Human Rights, which Saint John Paul II defined as a “milestone on the long and difficult path of the human race”, [1] and as “one of the highest expressions of the human conscience”. [2] Rights are not only individual, but also social; they are of peoples, nations. [3] The human being, indeed, in his or her personal dignity, is a social being, created in the image of God, One and Triune. We are social beings; we need to live in this social harmony, but when there is selfishness, our outlook does not reach others, the community, but focuses on ourselves, and this makes us ugly, nasty and selfish, destroying harmony.

This renewed awareness of the dignity of every human being has serious social, economic and political implications. Looking at our brother and sister and the whole of creation as a gift received from the love of the Father inspires attentive behaviour, care and wonder. In this way the believer, contemplating his or her neighbour as a brother or sister, and not as a stranger, looks at him or her compassionately and empathetically, not contemptuously or with hostility. Contemplating the world in the light of faith, with the help of grace, we strive to develop our creativity and enthusiasm in order to resolve the ordeals of the past. We understand and develop our abilities as responsibilities that arise from this faith,[4] as gifts from God to be placed at the service of humanity and of creation.

While we all work for a cure for a virus that strikes everyone without distinction, faith exhorts us to commit ourselves seriously and actively to combat indifference in the face of violations of human dignity. This culture of indifference that accompanies the throwaway culture: things that do not affect me, do not interest me. Faith always requires that we let ourselves be healed and converted from our individualism, whether personal or collective; party individualism, for example.

May the Lord “restore our sight” so as to rediscover what it means to be members of the human family. And may this sight be translated into concrete actions of compassion and respect for every person and of care and safeguarding of our common home.